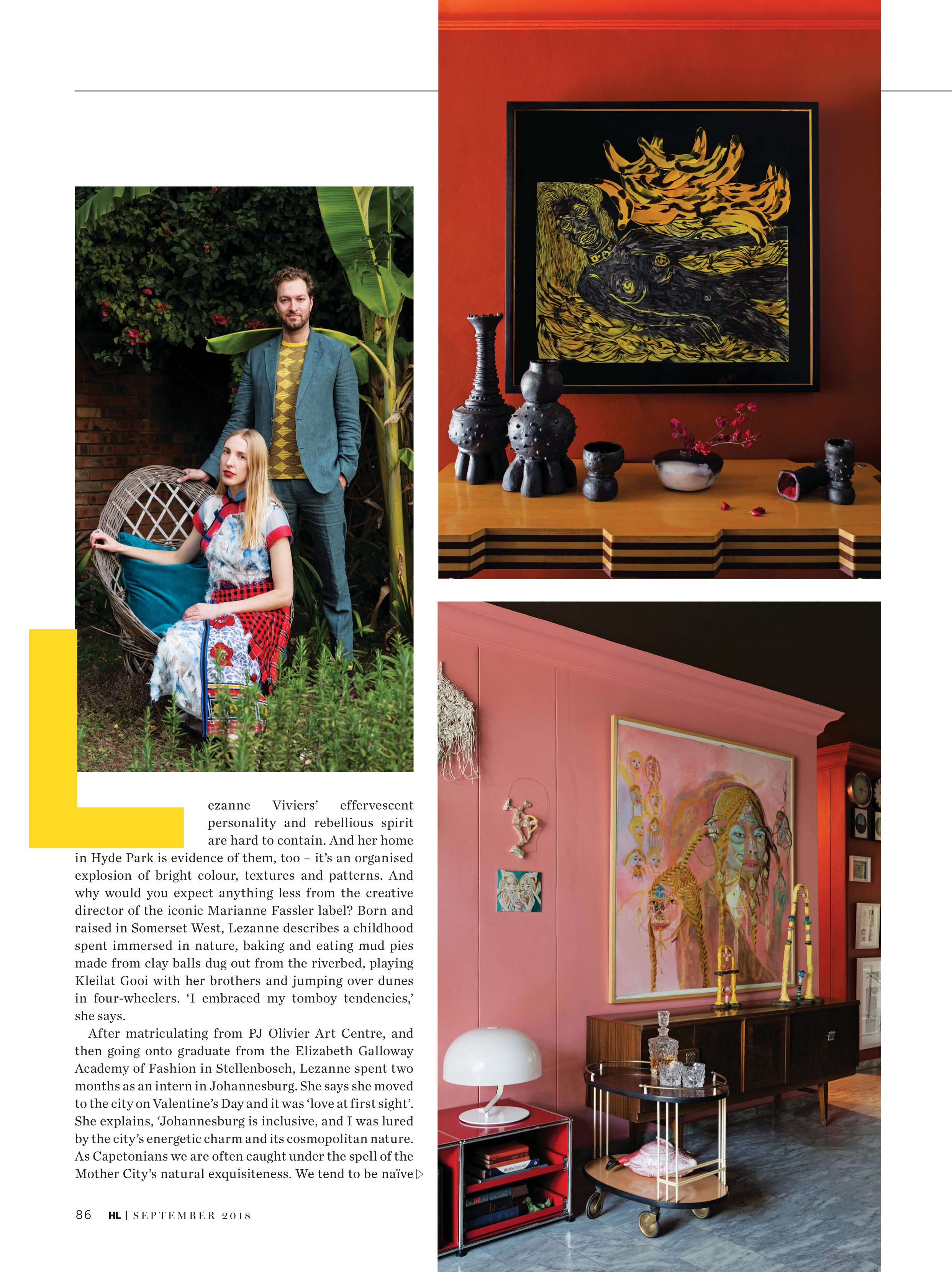 Lezanne Viviers’ effervescent personality and rebellious spirit are hard to contain. And her home in Hyde Park is evidence of them, too – it’s an organised explosion of bright colour, textures and patterns. And why would you expect anything less from the creative director of the iconic Marianne Fassler label? Born and raised in Somerset West, Lezanne describes a childhood spent immersed in nature, baking and eating mud pies made from clay balls dug out from the riverbed, playing Kleilat Gooi with her brothers and jumping over dunes in four-wheelers. ‘I embraced my tomboy tendencies,’ she says.

After matriculating from PJ Olivier Art Centre, and then going onto graduate from the Elizabeth Galloway Academy of Fashion in Stellenbosch, Lezanne spent two months as an intern in Johannesburg. She says she moved to the city on Valentine’s Day and it was ‘love at first sight’. She explains, ‘Johannesburg is inclusive, and I was lured by the city’s energetic charm and its cosmopolitan nature. As Capetonians we are often caught under the spell of the Mother City’s natural exquisiteness. We tend to be naïve and lack curiosity about what South Africa has to offer outside the borders of the so-called paradise. Johannesburg is my kindred city.’

Lezanne began an annual mentorship with Marianne Fassler in 2011. ‘It was tough,’ she says. ‘I was stubborn. Marianne gave me lots of freedom, sometimes really throwing me into the deep end with a client’s dress. She would always push me to become better. With time, I proved I could handle more responsibilities, and she allowed me to have fun and play in the studio.’

The living area is furnished with a modular sofa from @home as well as a vintage standing lamp and a Kartell coffee table bought from Decade in Melville. Among the artists whose work is represented on the gallery wall are Siwa Mgoboza, Lady Skollie, Norman Catherine and Walter Battiss.

In the bedroom, a vintage dresser from Re-Trend in Linden is topped with ‘Gwaais and Eyes’ by Georgina Gratrix.

Sitting in her living room, drinking a cup of coffee, with the morning sun illuminating all the paintings, prints and her array of vintage vases, Lezanne talks about her art collection. Every surface seems to be occupied with a ceramic work or a framed poster or bold-print curtain.

Remarkably, she acquired her first piece of art just five years ago. ‘Braided Bonding’ is a painting by Marlene Hettie Steyn, who was one of Lezanne’s fellow art students. In the class they took together, Marlene majored in painting and Lezanne in sculpture. Since then, Lezanne has accumulated an astonishing amount of artwork, all of which is displayed in the treasure trove that is her home; she describes herself as a specialised hoarder. ‘To buy Marlene’s work, I borrowed the money from my mom and paid her off over a year.’ Her second piece was acquired the same way. Then her mother ended the arrangement and Lezanne was on her own.

Japanese patched Boro textiles adorn the bed in the main bedroom. On the wall above the bedside pedestal hangs ‘Four Ass Prints, Hottentot Skollie’ by Lady Skollie. The vase was bought in Japan and the three oil paintings on the left-hand wall are ‘Fugly’ by Mia Chaplin, ‘Mad About Dogs’ with a ‘Love Locket’ necklace, and ‘The Mistress’, both by Gratrix.

In the blush-pink dining room, a large painting by Marlene Hettie Steyn takes pride of place above a Mid-Century Modern sideboard, on which a group of sculptures, also by Steyn, are arranged. On the wall above a USM modular cabinet from Magicode are pieces by Troy Makaza and Steyn.

‘I’m very intuitive when buying something,’ she says. And as she points out a railing weighed down by the brightly coloured kimonos recently acquired during their two-month honeymoon in Japan, Lezanne adds that she doesn’t mind splurging on both art and textiles.

‘I also bought these on the same trip,’ she says, unfolding delicately patched Boro textiles in varying shades of blue and indigo. Passed down through generations, the Boro cloth patchwork tradition originated in 19th- and early 20th-century rural Japan. When a sleeping cover or throw started to run thin, the family’s women would patch it with a small piece of scrap fabric using sashiko stitching. The result is a beautiful tapestry rich with family history and tradition.

‘Japan is the most considerate country and culture I have come across,’ says Lezanne. ‘Consideration results in something unexplainable. It’s a country that is so rooted in its traditions, yet so avant-garde and contemporary.’

Despite her strong point of view in design, art and fashion, Lezanne says her shared home is a combination of both her own and Walter’s tastes – perhaps a bit more hers than his. Earlier this year, the couple were married in a collaborative wedding ceremony that included building and creating everything from scratch with friends and family. Lezanne says all their guests were people with whom they have a sincere connection.

‘Walter is sophisticated and cherishes timeless modern design. He is responsible for the infrastructure of where we live. He considers practicality and clever design. My style is often caught in a fleeting moment, something intangible, but aesthetically and definitively exaggerated. I am always hunting for treasures, objects with integrity that were made in sincerity.’